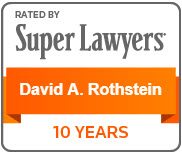 From August 1995 until February 2000, Mr. Rothstein worked for Stearns Weaver Miller Weissler Alhadeff & Sitterson, P.A., one of Florida’s premier full-service law firms, where his practice as a trial lawyer involved all aspects of civil litigation. Mr. Rothstein next joined Hanzman & Criden, P.A., where he focused his practice on complex commercial litigation and plaintiff-side class-action litigation and was named a partner of the firm in January 2002.

In 2003, Mr. Rothstein was recognized as a contributor to the article Establishing Injury By Reason Of Racketeering Activity: A Critical Analysis of the 11th Circuit’s Per Se Detrimental Reliance Requirement and Its Impact on RICO Class Actions, 77 Fla.B.J. 36 (March 2003). In 2006, Mr. Rothstein was named a charter member of the Ad Hoc Committee for the Eleventh Judicial Circuit’s Business Litigation Division, which established the framework and procedure’s for Miami-Dade County’s Business Litigation Division. Mr. Rothstein also is a long-standing member of the Board of Directors of Miami-based City Theatre, a professional theatre company dedicated to the solicitation, development, and production of short (one-act) plays unique to the cultural community of South Florida.